How do you create a connected learning environment to meet the needs of remote and foreign students?

"..the system is now performing excellently. The Panasonic projectors, displays and cameras are working very well and we haven’t had any issues with them, despite extended daily use."

WHU - Otto Beisheim School of Management is an internationally oriented and mainlyprivately financed business school based in Vallendar and Dusseldorf, Germany.

Founded in 1984, it is one of the most renowned German Business Schools, with an exceptional national and international reputation.

As part of a 2016 overhaul, the School opened a new building, the 'In Praxi Learning Center' which comprises five stories and is home to two modern lecture halls, a reading room, learning and lounge areas, a bistro, as well as offices for faculty members.

Built at a cost of around €8 million, the new building is home to one of Europe's most advanced learning spaces.

IPC-001 is home to a state-of-the-art conferencing and lecture capture system to help meet the demands of the University's remote student base.

"Panasonic has the best projectors on the market for applications such as this university."

Designed and installed by SIGMA System Audio-Visuell GmbH, based in Dusseldorf, the system consists of Panasonic projectors, remote cameras and displays, alongside Crestron control and a Panopto lecture capture server.

Christian Backes, head of trade and installation at SIGMA, said, "The challenge at this university is that they are growing so fast.”

"They now have multiple campuses, so there was a requirement to connect the cities of Vallendar and Düsseldorf. They also wanted to have the capability of connecting to other universities around the world, using high quality video conferencing. ”

"We installed a Panopto System capturing the content and storing it on the University's servers for their students to access in their own time."

Despite its sleek and compact dimensions, the PT-EZ770 Series produces a classleading 6,500 lm of brightness at WUXGA resolution, with a contrast ratio of 5,000:1.

The HE40 camera is installed in in the rear of the room, the HE2 in the front, to capture the students.The 49 inch display is placed at the front of the lecture theatre as a repeater monitor for the faculty staff. 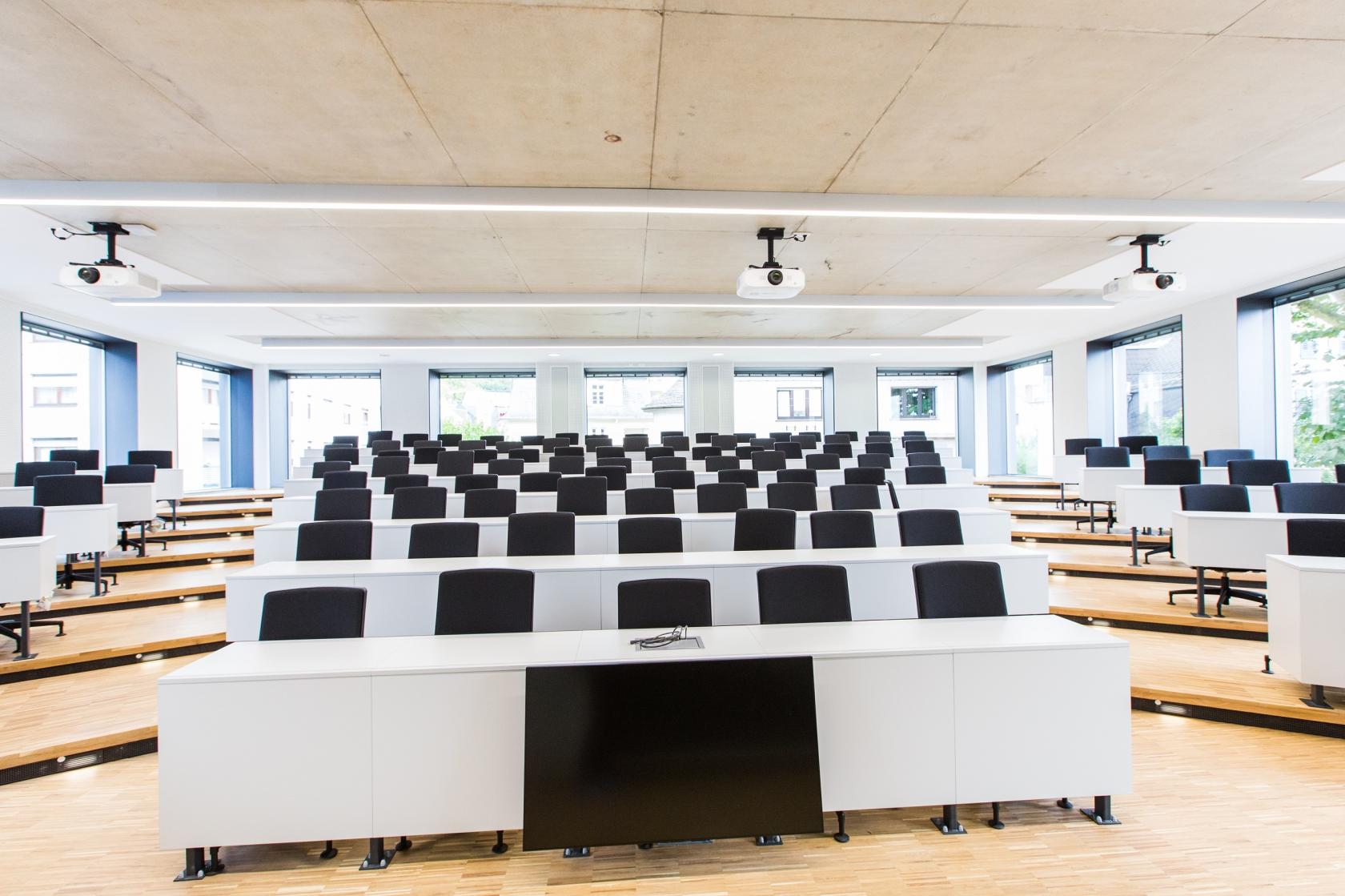 "After some small problems at the beginning, the system is now performing excellently. The Panasonic projectors, displays and cameras are working very well and we haven't had any issues with them, despite extended daily use."

The HE40 is a 1/2.3 type MOS sensor remote camera with 30x optical zoom. It supports PoE+ for single cable power and control. The Full HD camera is virtually silent making it perfect for quiet environments such as classrooms.

"We face the same difficultly with most University projects. The timelines are always extremely tight as works need to be completed outside of teaching hours or during holidays, which in a business school is even more tight than usual. Because the University is growing, they needed all the lecture space for teaching."

"SIGMA has worked very closely with Panasonic for many years. In our opinion, Panasonic has the best projectors on the market for applications such as this university. The Panasonic remote cameras are very high quality and produce great pictures.”

"The used Panasonic Displays and Projectors have built in HDBaseT inputs, so they are very easy to connect with a Crestron Digital Media Matrix and it is easy to control them by a Crestron control systems.”

"Panasonic products have a very long run time without any errors and are very reliable and if you need the Panasonic service (which is very rare) this service is also very well."