Creating the right look for a dark comedy

Creating the right look for a dark comedy

Creating a professional look that enhanced, rather than distracted from the comedic narrative

By filming with the Panasonic VariCam series, the crew were able to gather quick shots which maintained the pace while still placing the character at the centre of the story

""Comedy has to be the most important thing in the frame, with everything else coming after that."" 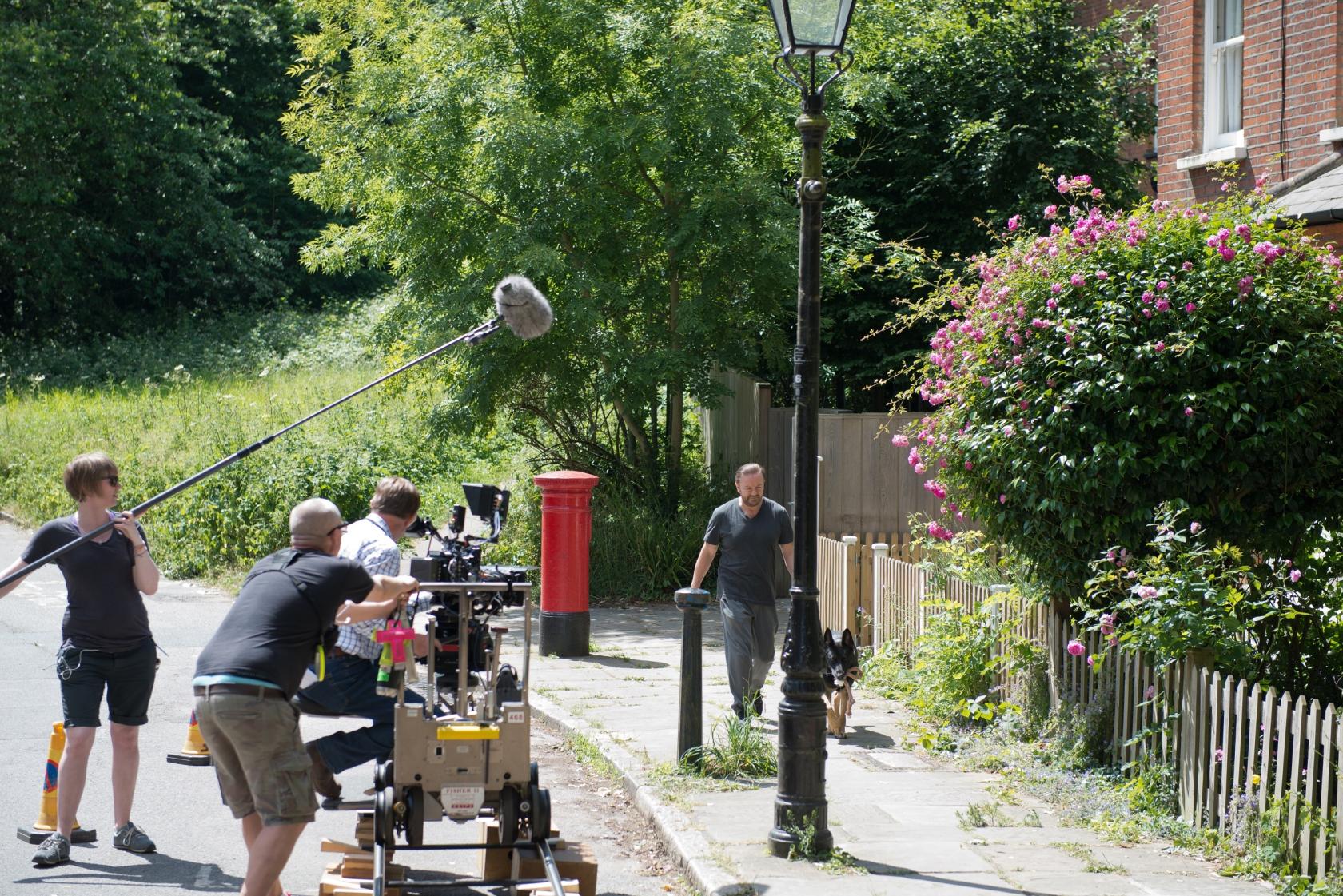 AFTER LIFE is a Netflix original series from Derek Productions. The six-part series is created, written and directed by Ricky Gervais, with Charlie Hanson as producer and Ricky Gervais and Duncan Hayes as executive producers.

Over the six part series, the narrative follows the story ofTony (Ricky Gervais), as he mourns the loss of his deceased wife. From contemplating taking his own life, to living long enough to punish the world by saying and doing whatever he likes, Tony goes on a journey as the friends and family around him attempt to save the nice man they used to know.

Gervais and his producers were keen to create an aesthetically pleasing series which subtly supported the comedic moments, rather than distracted from them.

Working alongside Gervais to create this final look was Martin Hawkins, Lighting Director and Director of Photography, and Vince Narduzzo, Colourist, who have worked alongside each other for over 20 years on shows as varied as Extras,Derek, and Holby City.

Commenting on this new challenge, Martin Hawkins said, “Having worked with Gervais in the past, we were keen to take on a new challenge outside of the typical documentary series that he is famous for producing. With After Life being a narrative plot line, we needed to focus different filming techniques to capture this amazing series."

He added, "Because comedy has to be the most important thing in the frame, with everything else coming after that. This series has a ‘look' that we feel doesn't distract from the comedy, and a ‘look' which we also wanted to be disheveled, to reflect Tony's character."

When planning in advance for the series, Martin was keen to gather the appropriate cinematography equipment that would facilitate these creative ideas. He added, "Ricky doesn't like to commit too far in advance of the shoot day as he loves working the scene with the actors on the day, so it was even more important for me to have the right kit with me."

"I needed a package which could cover me for any eventualities"

Over discussions with rental company 24-7 Drama, the decision was made to film the series with two Panasonic VariCam 35, and a VariCam LT, alongside a lens package that included Zeiss Ultra primes and ARRI Alura zoom lenses, plus a 12' Jib Arm and a MoVi.

Martin added, “Having previously loved the original VariCam, it felt like the stars had aligned when we were offered both the VariCam 35 and LT. We tended to shoot with both VariCam 35s, on dollies, tripods and even hand held when the scene demanded that kind of style, and the LT was used exclusively on a MoVi or the Jib Arm. 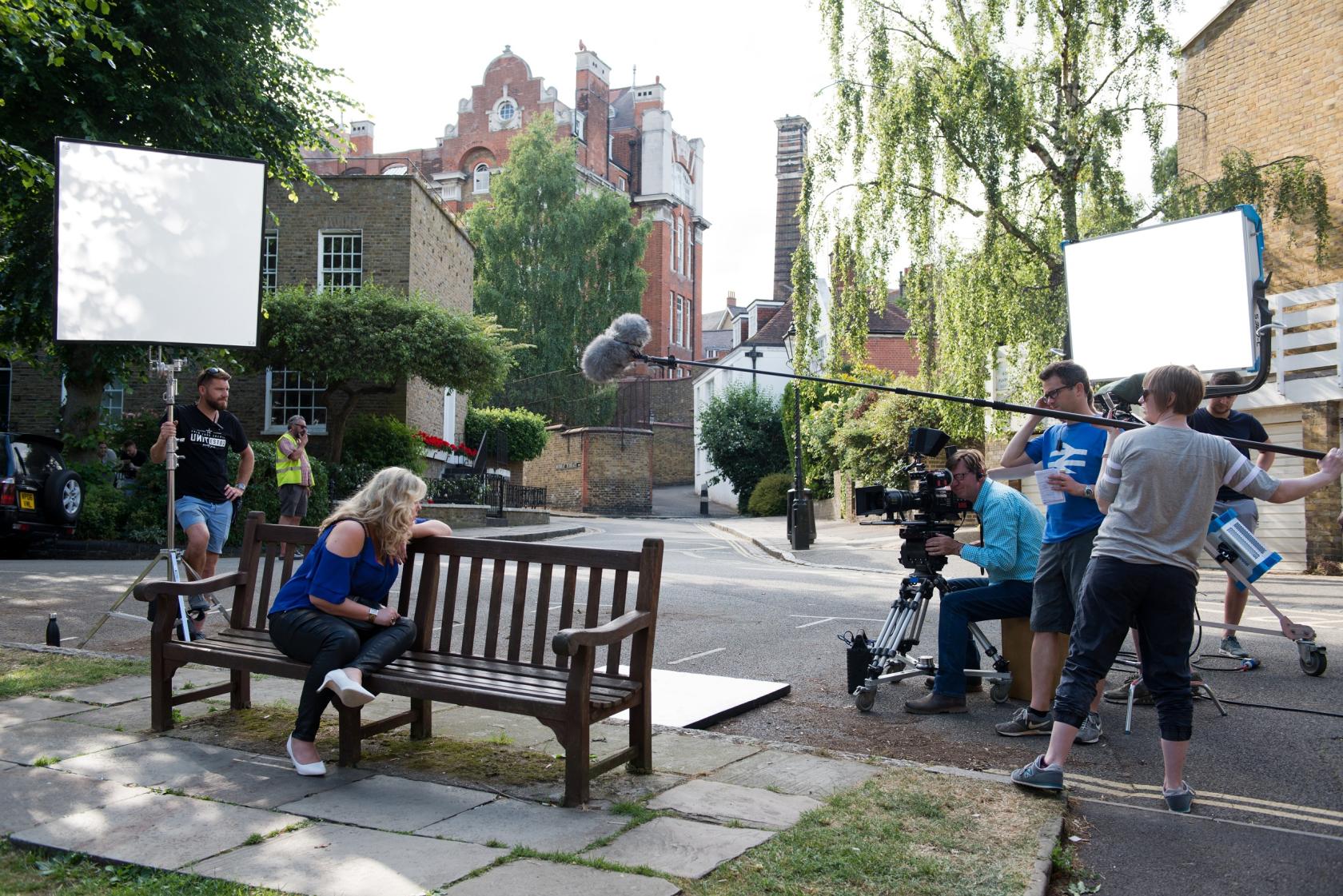 He added, "Whenever you are filming comedy, there is always that element of spontaneity. Shots that seem a great idea before, will often change when you're on the set and seeing the actors in front of you. Therefore, I needed a package which could cover me for any eventualities, and this was something that 24-7 Drama could offer. They are a great outfit and I cannot thank them enough for their help on this one."

Martin added, “I knew that Ricky was looking for a few shots where the camera would follow Tony. However, I was keen to ensure that the handheld filming didn't appear too much like a documentary style shot, so that encouraged us to utilise a Movi for stabilising the shots.”

Martin Hawkins and Vince Narduzzo then began to create test shots for Gervais to gather an idea for the overall look of the series. Martin added, “I knew we could rely on the look and the feel of the Panasonic camera, having used the 3700 during my time working for Holby City. Therefore, the main testing phase was done the week before filming started. We started to Grade some scenes together and discuss between us how we wanted to operate going forward. In the end, we decided we wanted to shoot the whole series very straight, with no ‘look-up' in the camera and everything in V-log with the 800 ISO setting.”

Vince said, “We want viewers to watch the series and feel the ‘wow' factor, without really knowing where it is coming from. It's all about the overall look.”

In particular, the dynamic range of the VariCam was utilised across the series, with a 4K HDR delivery used to enhance elements such as Tony's dishevelled look, which help reflect on his emotional journey.

"4K HDR is the future for the industry. In fact, there is a wider jump from HDR to 4K HDR than SD to HD"

Vince added, “We can already see that 4K HDR is the future for the industry. In fact, there is a wider jump from HDR to 4K HDR than SD to HD. In the end found we had a lovely look and feel to the images, with all of the colours nicely separated. It's pretty amazing when you see it.”

Another benefit when utilising the VariCam range was its versatility and flexibility which made it quick and easy to use on set.

To edit the series, Vince Narduzzo utilised a new grading suite which was built to meet Dolby Vision certificate.This was equipped with an EIZO CG 3145 reference monitor, and a Nucoda Film Master with ACES grading system. Across the series, the AVC Ultra 422 codec was utilised.

This was crucial when filming to a tight deadline, and to improve the workflow of the series as a whole. Martin continued, “The VariCam series is a great one to use from the point of view of speed. Even more so than usual, comedy requires a fast pace for the actors to maintain their energy on set. Directors just like filming, actors just love acting and so the least amount of time required to wait around the happier everyone will be, and that makes for a happy set. You cannot achieve that if you are constantly needing to wait in order to change settings, lenses or filters, which only adds to the pressure of time.

"With the VariCam 35, everything is right there in front of you, and with a simple push of a button you can quickly change menu settings and no one need know anything had happened. It's got a great Menu layout. We always filmed with two cameras, as Ricky loves to cross-shoot scenes so he can ad lib and overlap with the other actors and sometimes we would add the LT as a third camera on a scene." 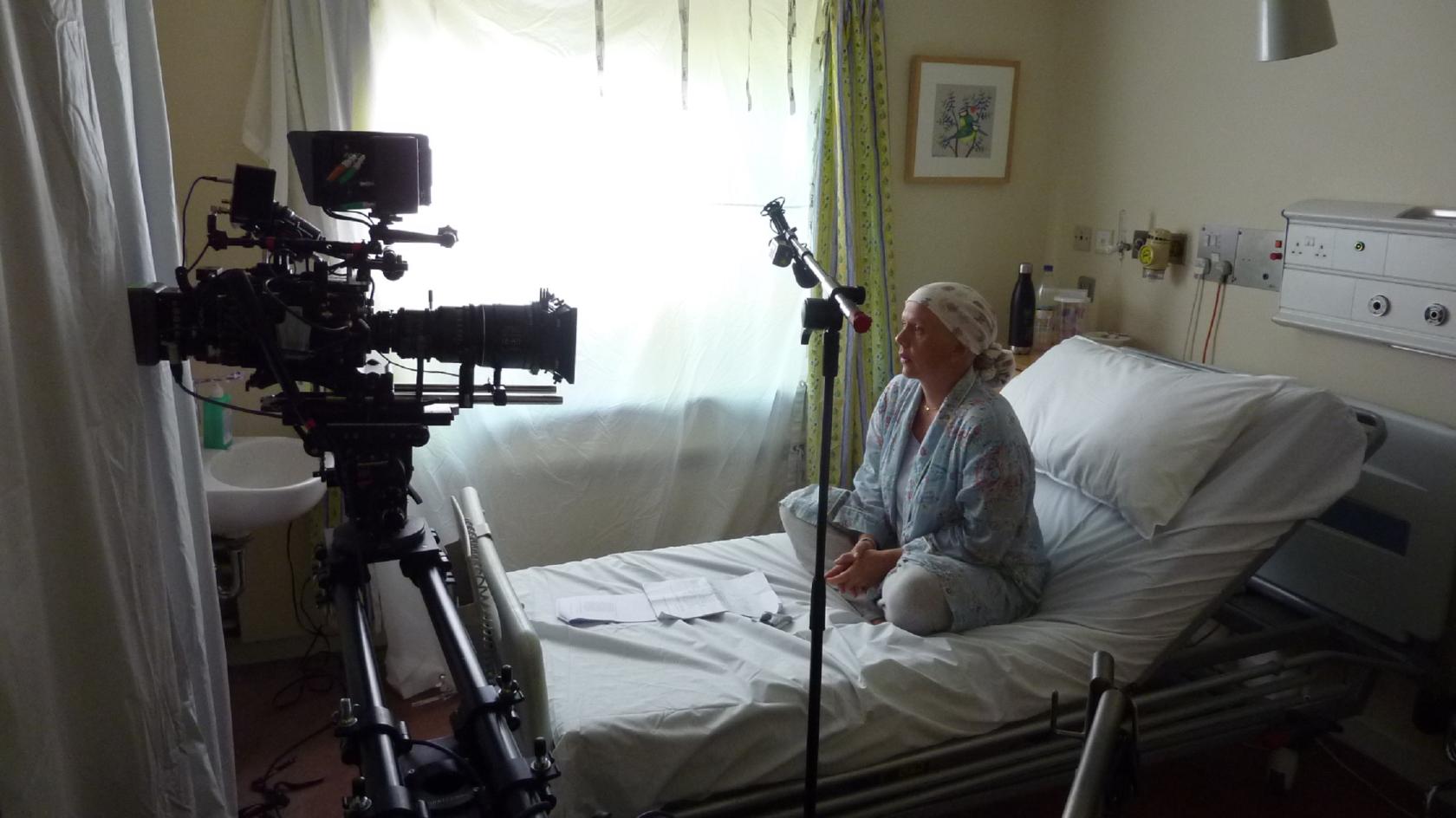 He continued, "In particular, we had these six scenes, one from each episode, with the psychiatrist (Paul Kay), which had to be shot within the time constraints of just one day. We managed to utilise the LT camera, locked-off on the jib arm above Paul & Ricky plus the two 35's so we covered each scene with multiple angles. By the end of the day we had completed all the scenes from the six episodes and even managed to finish early. They are some of the best scenes in the series."

In addition, the VariCam 35 was fitted with two teradek bolt units to enable shots from the other 35 camera to be viewed at any time. Martin said, "This was especially useful to enhance the ease of directing for Ricky when standing alongside my camera I could talk to him about both the camera's frames. It was easy to switch between the camera shots to decide which he preferred."

"With a VariCam, everything is right there in front of you, and in a simple push of a button you can quickly change settings and no one would know that anything is different."

Commenting on the grading process, colourist Vince said, “We knew that Ricky was keen to produce a light-hearted feel to the series, with the brightness of the outdoors creating a meaningful contrast to the darker scenes within Tony's house. This was important when Martin was filming, and something that I needed to carry on when it came to the editing suite. As well as this, we wanted it to look realistic. In fact, I would often find myself looking outside the window to then recreate the most realistic image I could in the suite, something made possible by the high dynamic range which is the closest view you can get to your own eyes.”

In one particular example, Vince and his team were able to create a meaningful scene which focuses the viewers' attention on Tony while stood in a graveyard.

Vince continued, “Although the scene looks simple, we had probably five layers of edits over the shot to achieve the look that we wanted. In doing so, we were able to ensure that Tony is the main focus of the scene, despite not necessarily being the brightest within it.”

In addition, the grading process utilised the software Clarity to produce an image that would make the series look more film like.

Vincent concluded, “We wanted a natural grain to enhance the narrative, and we were really happy with the end result of the series. This was only made possible by the equipment we utilised, and the teamwork, both whilst filming and in post-production. After a lot of hard work, we are now looking forward to seeing how the series will be received."