The new museum from Omega illustrates the extraordinary success story of the world-famous watch brand.

To use appropriate hardware and software to set the scene in the small, 8.5m-wide 360° cinema from the centre outwards.

This requirement could be met thanks to the compact projectors with their appropriate appearance and level of adjustability.

"The PT-RZ660 series of projectors is perfectly suited to continuous operation; the quality and stability of the picture barely change over time, which is extremely important for edge blending projections." 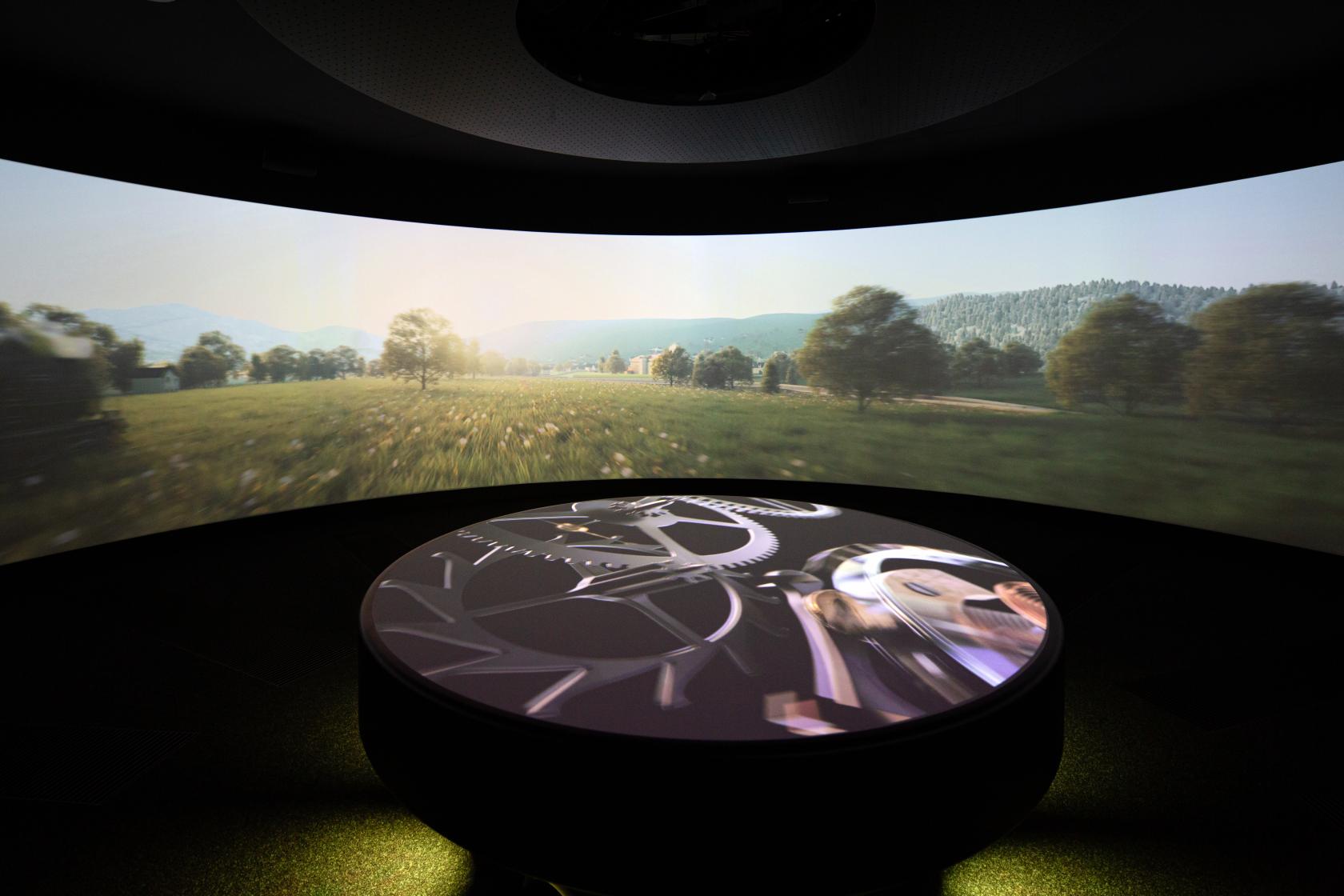 A beautiful, well-lit museum tells the extraordinary success story of the OMEGA watch brand. The museum is located in the striking “Cité du temps” building, which was designed by award winning architect Shigeru Ban and built using the most advanced timber construction technology in the world. The OMEGA Museum in Biel was the first museum dedicated to a single Swiss watchmaker, and has been sporting a new look since spring 2019. The museum tells the story of the watch brand in a varied and interactive way, through different stations and displays enhanced by multimedia elements. For this reason, Panasonic projectors have been installed in the 360° and 180° cinemas, and some displays have also been equipped with Panasonic displays.

Before entering the exhibition, guests first travel back in time. OMEGA's "History of Time" is a fascinating 360°video that shows humanity's pursuit of precision, from the first clocks to the most modern pieces. The edge blending projection was achieved using 8 PT-RZ660 models, with the projectors discreetly installed in the ceiling.

Adrian Schwarz of Tingo GmbH said that, “the projector is particularly well suited to the task, as we'd already used it many times for soft edge projections. Plus, along with the available lenses, it offered the best value for money for this requirement. As the lights in both cinema rooms are completely dimmed, the PT-RZ660 offers plenty of light output”.

He added, “Aside from the price, a deciding factor in our decision was that these projectors are best suited for continuous operation. From both an electronic and mechanical perspective, the quality and stability of the picture remains practically unchanged, which is extremely important for edge blending projections.”

Rolf Schwander, specialised AV planner at auviso also gave his endorsement: “It came as no surprise to us that OMEGA decided to utilise the PT-RZ660 for the special projection requirements in the cinema rooms. We have a lot of experience with these projectors in the systems and rental areas alike, and we've not been disappointed once. And we've always been able to count on Panasonic Schweiz to provide excellent support during integration and operation". 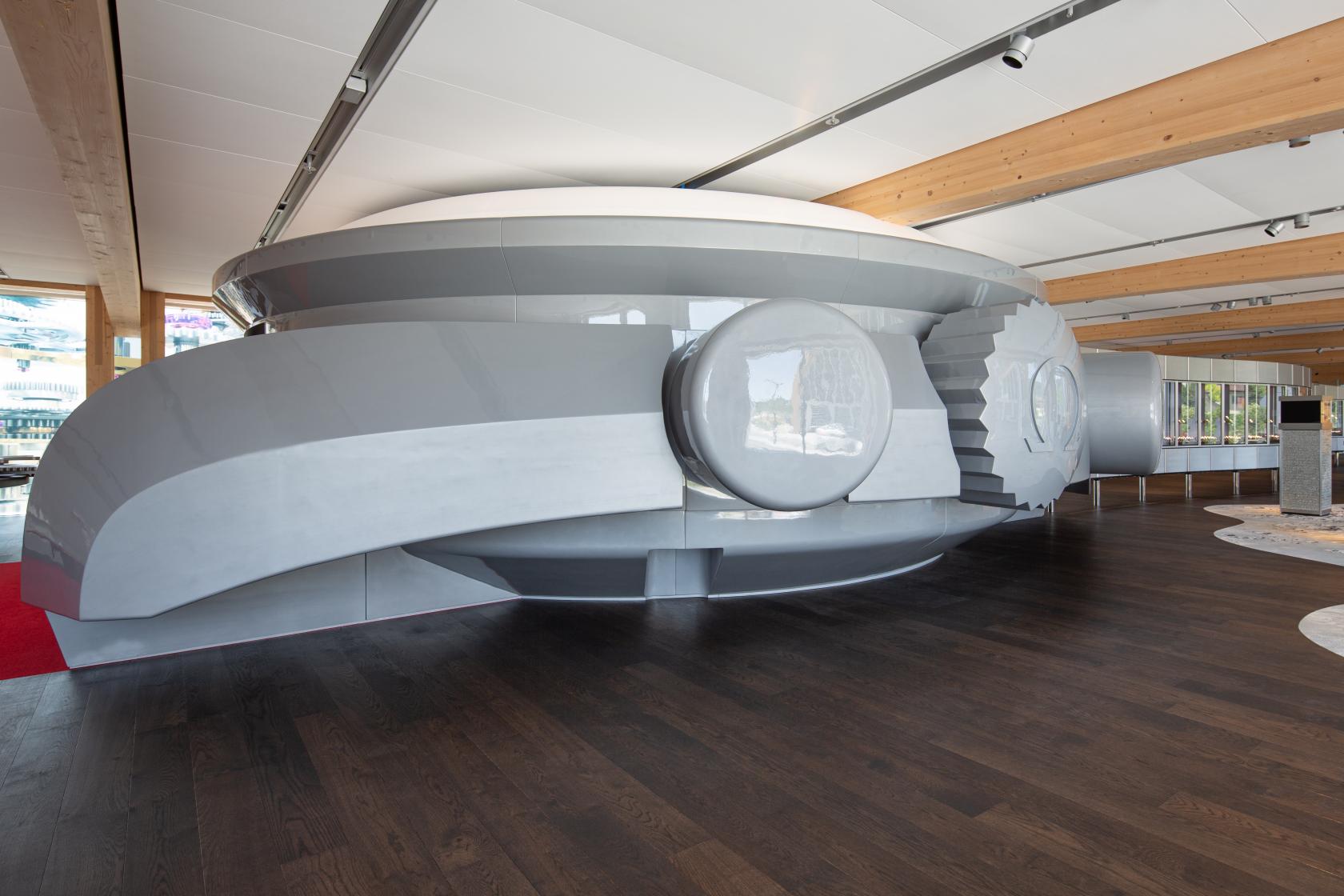 The precision of OMEGA and Panasonic

On their visit, guests can discover their inner Olympian on a 9m running track and time their sprint using the famous technology of the official Olympic timekeepers. What's more, they'll get an insight into the history of OMEGA's ladies' watches, walk across the surface of the moon and enter the thrilling world of JamesBond 007. Guests can also find themselves transported into the clockwork of a Speedmaster. The walk-in Speedmaster contains a 180° screen wall which shows an animated film depicting the inner workings of its famous coaxial escapement. This very precision is reflected in the Panasonic PT-RZ660's razor-sharp images, excellent picture quality and impressive brightness.

Adrian Schwarz of Tingo GmbH went on to explain that, “the real challenge we faced with the 360° projection was to set the scene in this relatively small space from the centre outwards using appropriate hard and software. The rooms have a really small diameter of 8.5m, so it's important that there are no visible focus problems and no distortions disrupting the overall picture. The Panasonic ET-DLE060 (0.6-0.8:1) short-throw lens allowed us to meet this requirement. We made use of every single reserve and adjustment option to ensure we ended up with the perfect overall picture”.

In closing, he said: “An automated calibration system from Domeprojection has also been installed in both rooms, which ensures that the vibrations from the wooden building and the slight image shifts they cause are offset and automatically readjusted. This way, together with the playout system media server, we were able to plan and commission a completely flexible, stable system that excites us as much as it excites the visitors!”

More information about this extraordinary museum can be found here.