Panasonic VariCam LT, EVA1 and Lumix S1 cameras were used to capture the extraordinary lives of young lynx cats for the BBC2 documentary, ‘Snow Cats and Me.’

A combination of the VariCam LT, EVA 1 and Lumix S1 were used for the production toolkit.

"EVA1 was incredibly light and instantly made a difference on location without compromising on image quality." ‘Snow Cats & Me', filmed for BBC 2, is the follow-up to a series of programmes made by Gordon Buchanan, which follows the lives of lynx cats in conservation. The initial 2011 documentary ‘Bear Family & Me' followed black bears in Minnesota and was produced by Jonny Young and Ted Oakes. Its success subsequently spawned a whole series of ‘And Me' programmes to include the lives of Polar Bears, Elephants and Grizzly Cubs.

Preferring to hunt at night, lynx cats are elusive and notoriously difficult to spot, particularly because their habitat exists deep in the forest. The lucrative fur and pet trades saw their population fall, however their numbers have since increased due to conservation efforts.

The format for ‘Snow Cats and Me with Gordon Buchanan' was much the same as its documentary predecessors. In this heart-warming series, Gordon helps pioneering Russian Big Cat expert, Dr. Victor Lukarevskiy rescue, rehabilitate and release these incredible lynx cats back to the wild.The two-part series was shot on location in the forests of Russia and consisted of a small, lightweight team.

Executive Producer Ted Oakes had previously worked with Dr. Victor Lukarevskiy on another series called Snow Tigers for the BBC in Siberia. The idea from the programme was born when Victor informed Ted that he was thinking of starting a rehabilitation centre for both injured wild lynx cats and those that had been kept in captivity.

In advance of the shoot, Ted had researched scientific literature on big cat rehabilitation and lynx biology, in addition to camera kit. “When we went on location for the second shoot, we were informed a couple of days before that the two lynx cats that Victor had sourced had mated, and had two kittens. It was a genuine surprise and meant that we had to hastily compile lots of research on what kittens do when they're days, weeks and months old, and what we were consequently going to film”.

Due to the unpredictable nature of the project it was important that the team selected a camera they could rely on. “Jonny was keen to use a camera that he was familiar with, was robust enough to be used in varying weather conditions, and could capture both the incredible wildlife and the in-vision sync of the presenters”, describes Ted. He chose the VariCam LT, having used it on previous projects.

Three shoots across a period of seven months were undertaken in Russia to successfully tell the story of the cats. Victor continued to source lynx cats throughout the filming duration. The total number of lynx cats were taken from two at the start of the project to six by completion of filming.

The challenges of shooting for long-days inan open-air forest influenced the cameras the team was able to use. "In Russia, during the second and third shoots there were a lot of mosquitos and dense undergrowth, meaning that moving around with a tripod presented a real challenge to the team", explains Ted 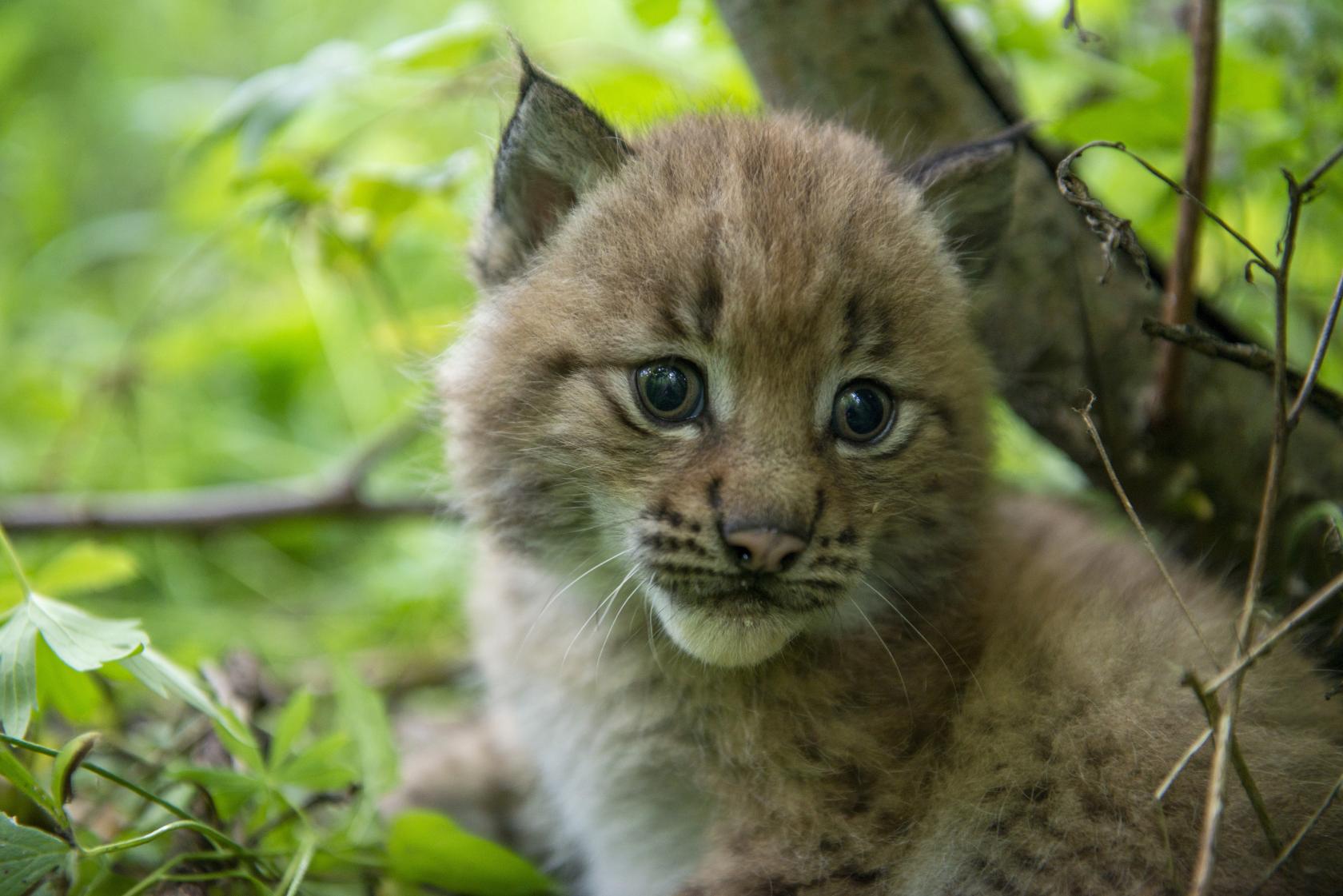 “For us, the innovation here came in the guise of weight savings. The EVAs were incredibly light and instantly made a difference on location, without compromising on image quality."

The team needed a camera that would be lightweight and portable but with all the features they required to get the best possible film, and were supported with a camera package from VI Rental Bristol. “My shooting style is mainly handheld and reactive”, describesJonny. “When Gordon is interacting with the animals, I can be getting the linking shots from up to 10 to 15 metres away. The EVA1 became the main workhorse after we decided that the LT - though a fantastic camera on our first shoot that gave us phenomenal pictures - was just too heavy as a handheld run-and-gun sync camera".

The team needed a camera that could deliver the same colour depth, off-speed shooting and dual native ISOs of the VariCam LT, but whilst being light enough to carry in a forest all day.

The weight of the EVA1meant that with the Wooden Camera PL mount adapter kit for the EVA1, the camera was portable on a tripod with a Canon CN20 50-1000mm lens. "It enabled us to shoot additional wide and beauty shots, opened up our lens options and brought versatility into our shooting,” justifies Jonny, Series Producer for Snow Cats.

The need to follow the cats around through the dense forest meant the cameras had to be easily manageable and familiar. “For us, the innovation here came in the guise of weight savings. The EVAs were incredibly light and instantly made a difference on location, without compromising on image quality.TheEVA1 allowed me to shoot for longer which increased our productivity. We are never working to a script, so when we capture Gordon he can talk for up to 10 minutes at a time whilst shooting in a difficult position.

We had two EVAs - one for myself to cover all the sync and action from Gordon and a second for Gordon to use to capture the beauty of the real stars of the show - the elusive and shy lynx cats. Both of us needed to be able to switch quickly between on speed and off speed and we were able to do this easily; the physical ergonomics and the menu structures of the EVA1 were very familiar to us", explains Jonny.

The Dual Native ISO was a particular feature which helped to capture every move of the lynx cats. “The lynxes would often be very active at sunrise and sunset when the natural light was low”, describes Ted. "We weren't using any lights as we were trying to be as unobtrusive as possible so light sensitivity was important. 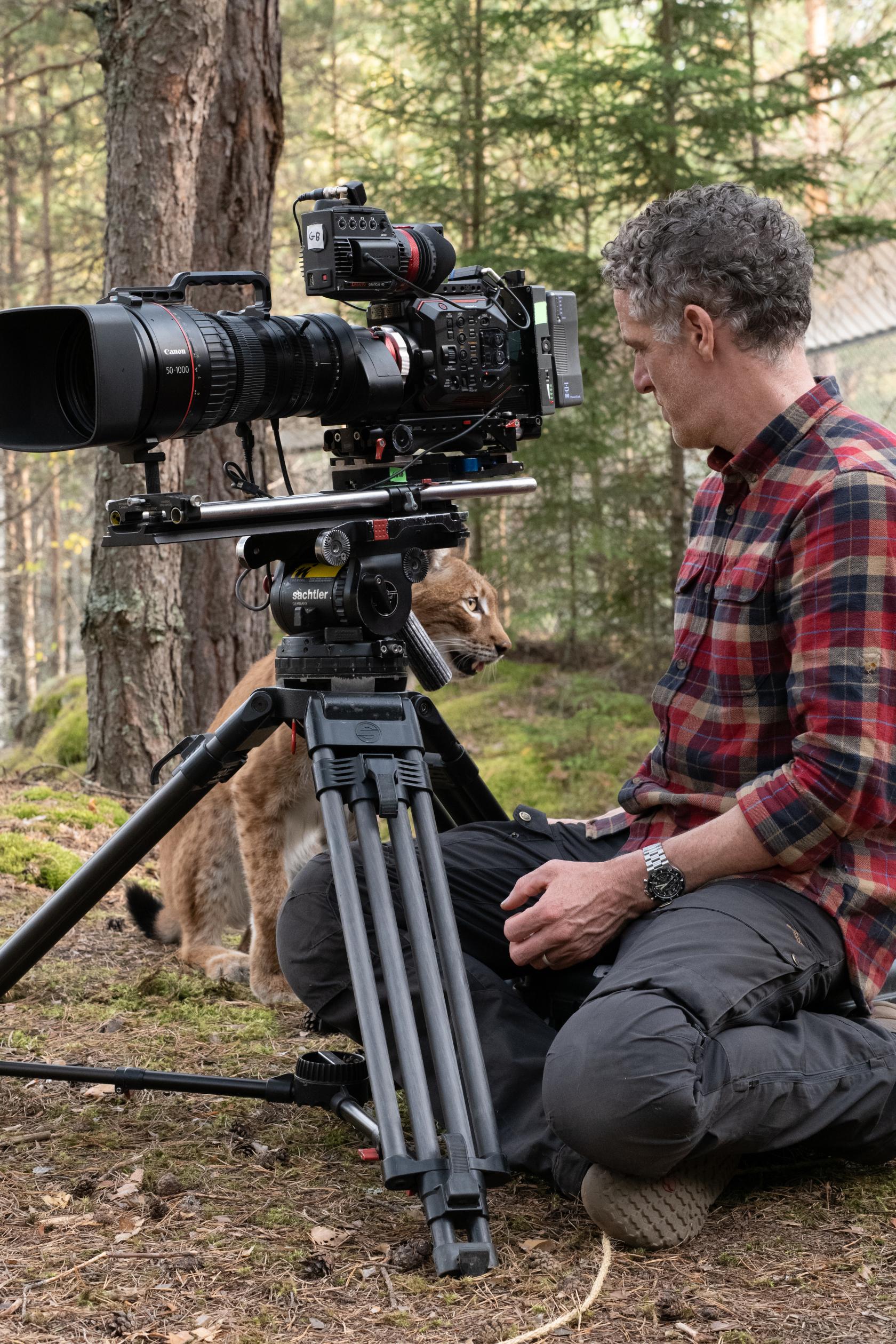 The dual native ISO meant that we could switch to 2500 at a touch of a button and work in really low light with minimal picture noise. This was fantastic when shooting in woodland, where light levels can go from very high to very low extremely quickly and was particularly useful when zooming in on the lynx cats”.

An addition to the Snow Cats toolkit was the Lumix S1 mirrorless camera, as there was a need to shoot stills for press to create publicity surrounding the series. “The S1 was more than capable of giving us great stills, but it had another trick up its sleeve, the video capabilities of this small camera are incredible. We knew that we were going to need to shoot the lynx cats running and jumping at a high frame rate. We'd sometimes only have one shot at a particular behaviour, so we needed as many cameras as we could afford pointing at the cat when it was in action. The S1 was an innovative choice for us; it's a relatively cheap way of shooting off speed video and it also benefitted from providing a similar Panasonic look”, comments Jonny.

It was important to the film-makers that the programme series opened up a wider discussion around the impact of conservation. “Conservation is at the heart of every show we do”, explains Ted.

“This series was motivated, in part, by the frustration with the erroneous and untested belief that captive animals can't be returned to the wild. Two of the cats in this series had never experienced the outdoors until this experiment of Dr Victor Lukarevskiy's. However, they ended up being released, this is a great and optimistic sign".

I would say that these programmes highlight to the audience that the world could be a better place if we gave some of these animal species an easier ride by proactively looking at ways at increasing their numbers in the wild to their previous level”, suggests Jonny.“It also highlights some misconceptions people may have about lynx cats as predators. For instance, there are no reported incidents of lynx attacking humans".

The documentary has already been gathering positive feedback. “Through Gordon’s warm character and passion, the series makes some difficult and hard conservation issues easily understood through his warm character and passion", comments Jonny. “In a tangible way, the project that Victor is undertaking is brand new. The broadcast has already led to offers of help from around the world from people who have become engaged in the story and want to help".