Introducing the AJ-PD500, the first P2 HD recorder with native AVC-ULTRA recording and built-in microP2 card slots. Its range of format choices (including AVC-LongG as standard, AVC-ULTRA Class200 and AVCHD playback as options*1) and array of professional input/outputs make the AJ-PD500 ideal for use in reality television, long-form documentaries, live events, satellite facilities, news trucks, and as a redundant playback/record device in news facilities.

The AJ-PD500 has two built-in slots for Panasonic’s new microP2 cards, which have an SD card form factor. The PD500 also has two standard P2 card slots*2, as well as a SD card slot for proxy/metadata and AVCHD Playback*1 (option). 12V battery-operated, the AJ-PD500’s rugged, half-rack design holds up to the demands of field production, yet at under 4kg its compact (half rack mount) and light for easy transport.

With AVC-Intra 100/50 record/playback as well as AVC-LongG, the AJ-PD500 makes 10-bit, 4:2:2 master-quality video versatile, cost-effective and portable. This ultra-reliable, dedicated deck allows users to play back and review footage on its 8.9 cm (3.5 inches) 16:9 LCD screen; manage clip files and metadata; record full resolution, 10-bit quality content from a wide range of Panasonic and non-Panasonic camera recorders via its HD-SDI input; and back up data onto hard disk drives.

Additional valuable features include up/down conversion, a USB keyboard connection for easy metadata input, waveform and vectorscope display functions, and a selection from many functions for allocation to six user buttons.

In addition to the standard high-resolution proxy recording and AES/EBU four channel 24-bit audio, there is the option to playback AVCHD content*1.

*1 Available in the near future
*2 Users must select between microP2 and standard P2 card recording. 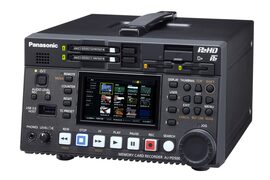 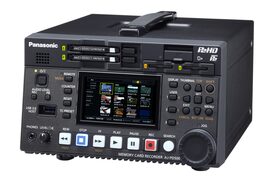 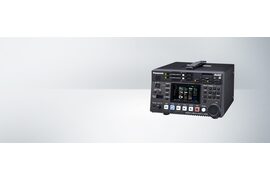 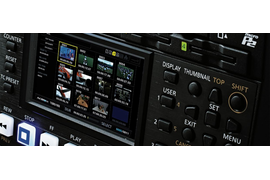 This P2 card offers up to 30Gb of storage capacity. A single P2 card can record up to 30 minutes with the DVCPRO HD or AVC-Intra 100 codec or up to 60 minutes with the AVC-Intra 50 codec. This large capacity provides sufficient recording time even for a handheld camera recorder or portable recorder with two card slots. With an updated generation of internal flash memory on this P2 card, it ensures that high file transfer speeds and secure data transfer are maintained. This memory card is also impact, vibration and temperature resistant to ensure reliability and uninterrupted recording.