For both safety and costs reasons, it is difficult to use many of the British Army’s most sophisticated defence systems in training exercises; and yet, it is critical that members of the British armed forces are trained in how to use and integrate these systems.

Merging virtual with reality
Cubic’s Synthetic Wrap solution allows soldiers in the field and those at Exercise Control (EXCON) to see and use virtual systems in a training exercise, just as they would in a real-life combat situation.

The technology works by creating a life-like, computer-generated landscape of the exercise area with every instrumented soldier and vehicle tracked in real-time. Virtual jets, drones, artillery or missiles can then be incorporated into the training battlefield. Soldiers in EXCON can simultaneously see both live and virtual elements of the battlefield and train using the full suite of operational capabilities for the first time. Soldiers on the ground, using specially adapted equipment such as target locating binoculars, can also see both real and virtual elements of the battlefield.

Cubic Defence UK was awarded a two year plus optional one year contract by the British Army to develop its Synthetic Wrap training at the beginning of 2016. The ground-breaking solution is delivered using Virtual Battle Simulation 3 software running on Panasonic Toughbook CF-54 and CF-20 rugged notebooks both in the exercise control room and in the field. The solution is currently being used in exercises at Salisbury Plain, Canada and Kenya.

Cubic Defence UK chose the Panasonic Toughbook CF-20 detachable notebook for this latest trial because it matched their needs. “The Panasonic devices have powerful processors and two sim card slots, both essential components to running our sophisticated synthetic wrap solution,” said Martyn Armstrong, Senior Programme Manager at Cubic Defence UK. “They are built to withstand the harshest of environments, even a battlefield, and the detachable tablet element of the Panasonic CF-20 device makes it lightweight and versatile to use. Panasonic was an important partner in helping us move from contract start date to first delivery in just 68 days.”

Chris Turner, at Panasonic Business, added: “We began designing rugged mobile devices for the defence industry 20 years ago and those designs helped Panasonic Business quickly establish itself as the European market leader for rugged business mobile devices. Today, we continue to invest in the latest innovations to ensure our range of Panasonic Toughbook notebooks and Toughpad tablets remain the best choice for defence organisations around the world to use for their technology needs.”

Consequential training
“For the British Army this system is as close to battlefield reality as technology can provide today,” said Armstrong. “It is the first consequential training solution available for any army, anywhere in the world. It means that soldiers can see the results and impact of their decisions taken during a live exercise and can then review and rehearse them repeatedly after the event to continue to improve their skills. In the future, we envisage training time spent using these virtual systems will go towards a soldier’s formal accreditation.”

The Clogworks® Dark Matter™ hX carbon fibre, multi-rotor UAV was used to lift a 4G transmitter to 100m above ground to create a high bandwidth communications network that can be quickly established, moved or removed in minutes.

“This successful trial, using a combination of cutting edge British technology and Panasonic Toughbook notebooks, is another significant step in keeping the British Army’s training at the forefront of the digital revolution,” said Armstrong.

Two parts, one story
The Panasonic Toughbook CF-20 delivers a new level of unrivalled versatility for mobile computing as the first fully rugged detachable notebook. Offering the best of all worlds for mobile workers, the Toughbook can be used in 6 different modes to meet every business need. With its glove enabled touchscreen, up to 20 hour hot swappable battery life and purpose-built Vehicle Mount and Desktop Port Replicator, the Panasonic Toughbook CF-20 is an unrivalled rugged mobile business tool.

Semi-rugged redefined
The new Panasonic Toughbook CF-54 with Windows 10 Pro is one of the thinnest and lightest semi-rugged notebooks but it doesn’t compromise on durability. Its unique ‘honeycomb’ design offers improved strength, and the MIL-STD 810G and spill resistant keyboard and touchpad area protect against damage. In terms of flexibility, the Toughbook CF-54 notebook is equally outstanding. It offers a huge array of configuration options, making it easier for customers to create exactly the device they need. 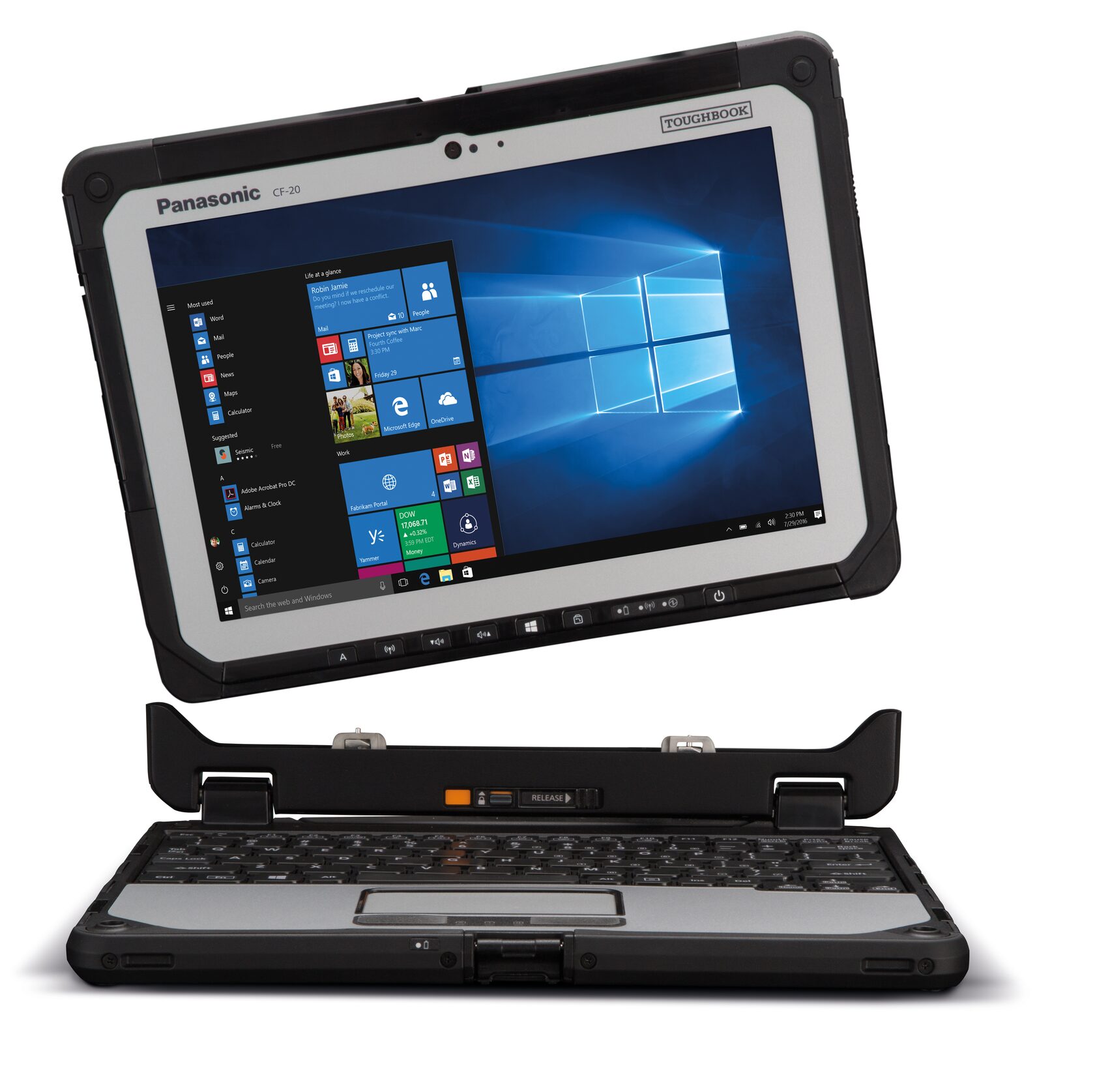