Putting engaging learning on the record at Huddersfield

Putting engaging learning on the record at Huddersfield

To give students the opportunity to learn on their own whilst accommodating to the historic stone work of the building.

"“There’s very little on the market which competes with the AW-HE2 in terms of size, form factor, and value without compromising on quality, so it's a good fit for these kinds of environments.”"

Lecture capture systems have grown in popularity in the past few years, as universities look to give students the opportunity to learn in their own time, seek out different ways of learning and revising before exams, or let them go back and rewatch certain parts of a lecture they might have missed.

Panasonic's AW-HE2 remote camera has been at the heart of a brand new upgrade at Huddersfield University.The compact camera has been installed as part of a wider AV refresh, with the installation of Panasonic PT-RZ370 3,000 lumen projectors as well as a new Extron control system that removes the need for remotes.

Roche AV's involvement throughout the duration of the project, from the initial idea phase right up to the implementation and continuous monitoring stages, was crucial to the overall success of the installation. The end-result of this is that the university is now able to offer an alternative educational route for their students, by having the ability to watch and listen to a lecture multiple times, and enabling them to make thorough notes and double check their understanding of a topic.

It's a large project that has seen 112 AW-HE2 cameras installed across the University, alongside 37 PT-RZ370 projectors.

The University was prompted to invest in lecture capture following a visit to another University by the Pro-Vice Chancellor, who saw that students there were already benefiting from being able to retrieve and play back recordings of previous lectures and seminars.So, with a number of new developments in recent years, including the Oastler building on the edge of campus, the time was right for a technology upgrade.

Panasonic technology has made the biggest impact in the Business School, where every room across the four floors of the £17m building has undergone an AV upgrade.

The new equipment will help to reduce the maintenance costs for the University, as the resilient SOLID SHINE laser technology within the PT-RZ370 gives 20,000 hours of maintenance-free operation, with a level of colour and brightness far surpassing conventional lamp-based projectors.

The projector's daylight view function also keeps images clear even in the brightly lit environment of a classroom or lecture theatre. The built-in sensor measures the ambient light and then automatically adjusts the halftone colour and brightness levels to ensure there is no need to turn surrounding lights off.

At the same time instant on/off enables sessions to get started straight away.

"It's a camera that fits into a really nice little niche...there's very little on the market which competes with it"

The project at Huddersfield has been implemented in stages, with a number of rooms within each building selected for an upgrade. This has included a number of schools within the University as well as lecture theatre facilities that are shared across academic disciplines.

Administrators at the University decided on an opt-out format, with the capture system linking into the timetable. In the rooms where the AW-HE2is installed it means the system automatically starts recording at the time the room is being used, and if the lecturer does not want to record they have to physically stop it. 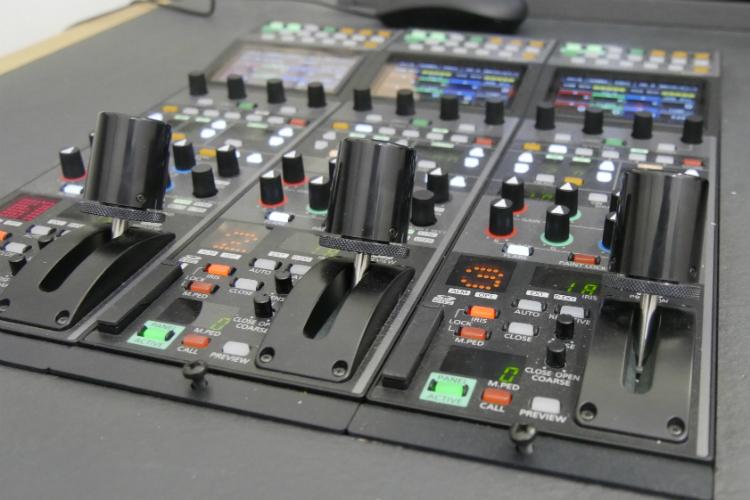 “The majority of the cameras are affixed directly into the ceiling, but there are some areas of the University where we've had some difficulty getting the cameras in," said David Evans, Technical Support Account Managerat Roche AV.

The historic stonework of the Canalside building is one example. A 19th-century Grade II listed former spinning mill, there was no way to drill directly into the walls to install the cameras.

“With the wide field of view that the camera's lens has got, we can capture the full width of the image from a variety of positions.”

“The zoom facility on the cameras then gives us the capability to fine tune the image to get the extra view required, even if the camera is mounted in a difficult position", added David Evans.

As well as the primary function to record lectures and sessions, the system has also provided an unexpected benefit to technical support at the University, as technicians can provide support to academic staff with instructions over the phone and help get problems solved more quickly.

"It's a camera that fits into a really nice little niche. It's not expensive, nor is it a CCTV or consumer camera either, which means it gives excellent image quality and a lot of versatility," said Jon Hubery, AV Sales Manager at Panasonic distributor Holdan.

“Those kinds of things are unique about it,” he continued.“There's very little on the market which competes with the AW-HE2 in terms of size, form factor, and value without compromising on quality, so it's a good fit for these kinds of environments.”

"It's a camera that fits into a really nice little niche."

The system gives staff the ability to make any edits if necessary to the footage using the Panopto lecture capture software. It is then uploaded onto an online portal, accessible by students and arranged by module.

“It goes onto the VLE per module, so the recording is loaded to the module that the class is scheduled for – it all ties into the timetabling system," explains Julie Berry, one of the University's IT Support Officers.

"That is automatically uploaded and then the staff member has two days to edit anything. They edit through Panopto, which is a really quick and effective editing tool."

“Other universities have a tiered system, so certain rooms may only have a certain level of AV equipment installed, but it was decided here to have it uniform across the campus,”

Feedback from the University so far has been largely positive.