Note: Use of ET-EMU100 is subject to specific installation and usage conditions. Consult your sales representative for details before purchase. Use of ET-ELU20 requires PT-MZ880 Series with main projector firmware Ver. 1.03 or later.

With a short 0.330–0.353:1 (WUXGA) throw-ratio, the lens supports a minimum projection distance of about 1.43 m (4.69 ft) for a 200-inch (16:10) image. Viewers can approach the screen without casting a shadow, making the lenses ideal for image projection onto passageway walls or other narrow spaces.

The lense enables image reproduction with zero screen offset, eliminating the distracting gap between the top of the image and the ceiling or projector mounting surface. Position the image for seamless floor-to-ceiling image coverage over walls, or completely fill the available screen area without gaps. The mirrorless design also eliminates lens overhang. Mount the projector directly on the ceiling and avoid the hassle and expense of in-ceiling projector recessing to keep the screen clear in rooms with low ceilings.

Thanks to its mirrorless design, projectors can be set with lens positioned at screen center (rather than floor or ceiling) in rear-projection installations. Brightness is distributed more evenly and colors reproduced with greater uniformity from the center of the image out to the corners and edges.

Note: Hotspots may occur depending on the screen.

Optical zoom enhances projector location flexibility. Installing a projector with fixed ultra-short-throw lens usually demands a high degree of precision, with installers sometimes having to remove, relocate, and reattach the projector several times before correctly placing the image. With ET-EMU100, adjustment can be performed at the technician’s convenience after the projector is installed using powered optical zoom and V/H Lens Shift* functions, saving time and labor and reducing overall cost of installation.

Lens-Shift*1, range of V: ±50 %, H: ±24 % (ET-ELU20) lets you move the image further than comparable lenses in four directions from Home position without needing to relocate the projector for unrivaled flexibility in post-installation adjustment. It increases projector location flexibility where ceiling fixtures or other obstructions restrict ideal placement. For convenience, powered zoom, lens-shift, and focus are performed via projector remote control or the free Panasonic Smart Projector Control*2 app.

Durability for Peace of Mind 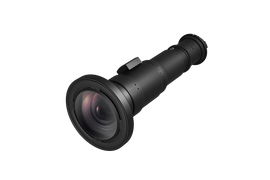 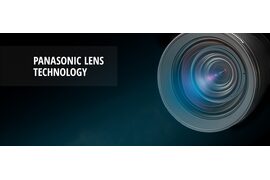