Panasonic projectors map ‘Into the Forest’

Panasonic projectors map ‘Into the Forest’

"Without live back-up, this event was totally dependent on the reliability of the Panasonic projectors and the peace of mind that they could offer." 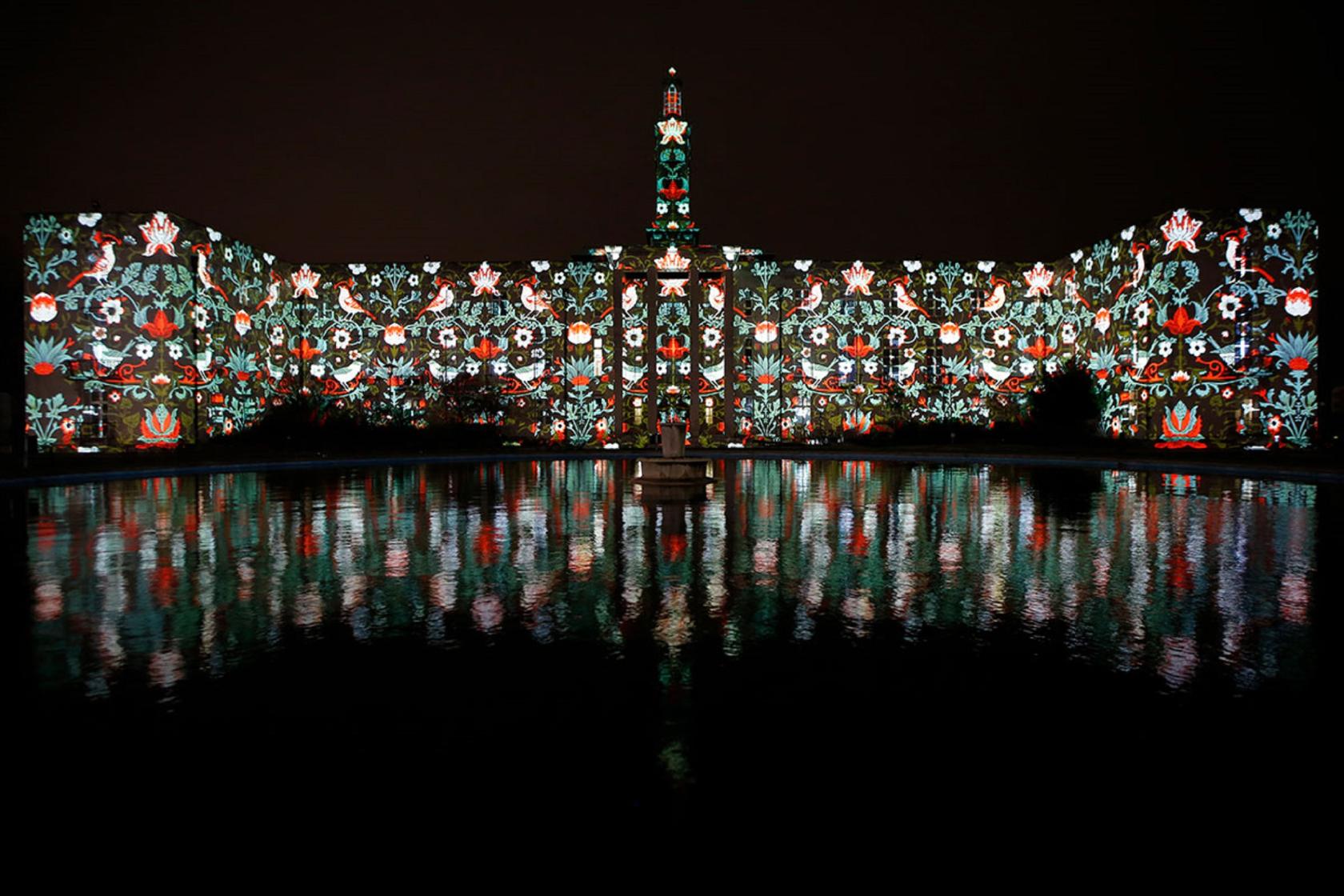 Awarded the title of the first ever Mayor's London Borough of Culture, Waltham Forest and its local community celebrated its history of culture with a three day festival of light and sound.

The event united the community with stories of the past, present, and future of the north eastern Borough across its three main themes: Radicals, Makers, and Fellowship.

In particular, a showcase moment was experienced as the Waltham Town Hall was transformed in its evening performance ‘Into the Forest'. Created by artists Greenaway and Greenaway, AV Production Hire company QED productions provided the technological solution to the high energy film which told the story of the borough through the eyes of Waltham Forest's diverse communities.

Greenaway and Greenaway's collaborated with Mercury Music Prize-winning musician and producer Talvin Singh who created the soundtrack for the show, bringing the sounds of the drum and bass back to one of the areas where the genre first began in the early 1990's.

"The Panasonic projectors were lighter to install, making them more flexible and better placed to projection map the entire building."

Leading up to the event, QED productions was faced with the challenge of integrating the most appropriate AV technology to cover all surfaces of the building, while maintaining a high level of reliability and quality.

"The Town Hall is an extraordinarily impressive art-deco style building set in spectacular grounds, so we were most keen to exploit its full potential and to totally transform it," said QED Director Paul Wigfield. “We decided to use twelve Panasonic 30,000 lumen PT-RZ31K projectors running in portrait mode to cover the front faces of the building, as well as all three visible sides of the clock tower."

Precise projector placement and 3D modelling was required to enable full coverage of all the different surfaces and fill in the area behind the central columns. By separating the columns and the facade in the template design, QED was able to create a seamless canvas for the imagery to flow across, whilst still allowing content to wrap around the pillars. 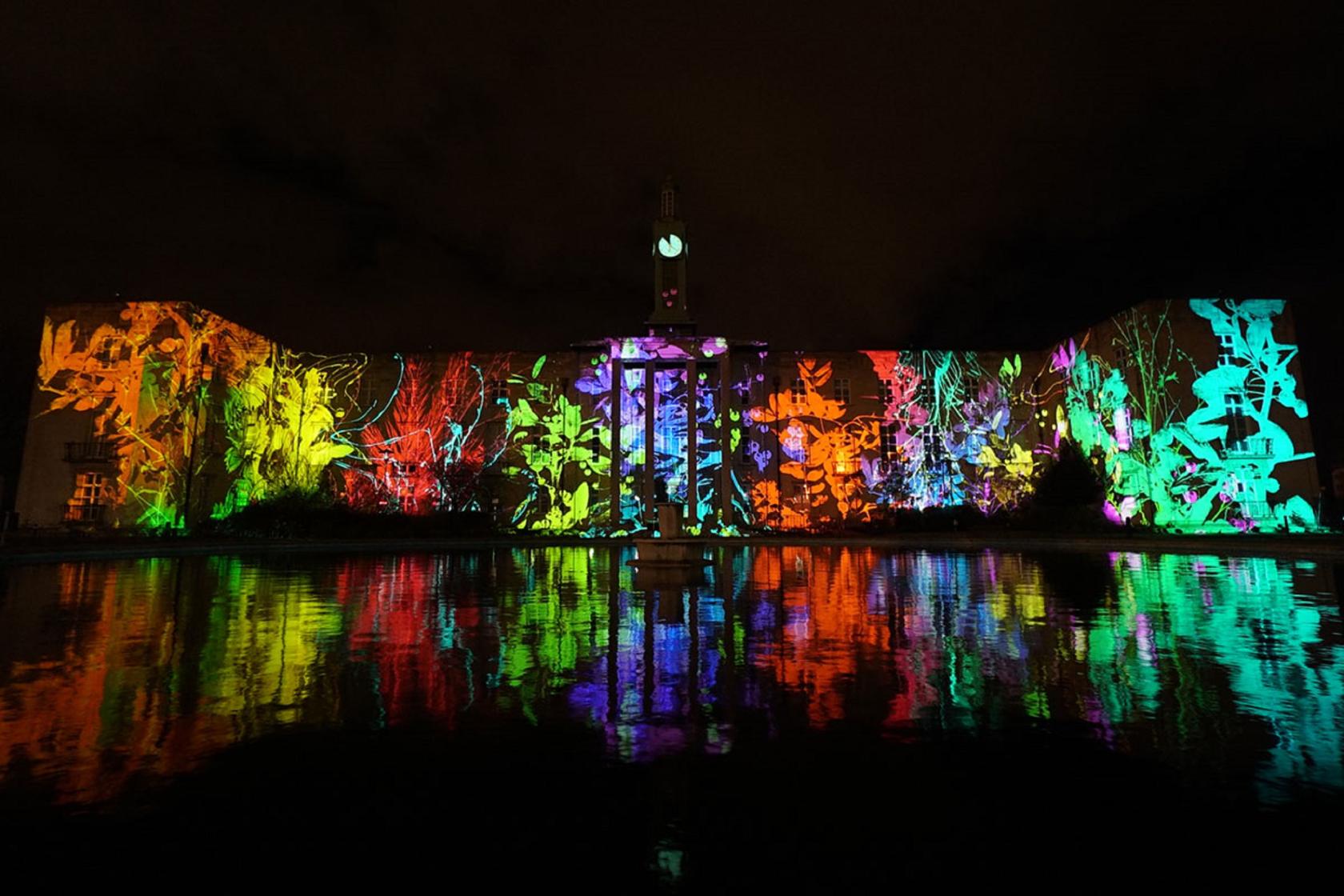 Four 6m high projection towers were positioned at the opposite end of the site to the building with all the projectors cross-shooting in order to avoid the multitude of lamp-posts, trees and structures that would otherwise have blocked the projection beams.

Wigfield added, “Because of the intricacies of the building and the projection we were trying to create, the ease of installation and operation was key. The Panasonic projectors were well suited to the event in comparison to competitors, asthey offered the highest resolution whilst conveniently running on 13amp supplies. In addition, they were much lighter to install, making them more flexible and better placed to projection map the entire building.”

QED's Head of Digital Media Harry Ricardo added, "It's such a great building to project onto and having a full 3D scan of it and the surrounding area allowed us to figure out the optimal positions for our projectors well in advance. We designed the template to allow Greenaway & Greenaway to really make the most of the architectural features and to play with its form. It is really exciting to be a part of an event on this scale which has been so well received by the community."

The precision of the projection line up alongside QED's KVM Xtreme fibre system for the disguise media server line-up were essential to create the many different angles and faces required to map. Through this system, full control of the media servers was available anywhere on the site.

Paul Wigfield concluded, “Without live back-up, this event was totally dependent on the reliability of the Panasonic projectors and the peace of mind that they could offer. By combining both QED's creative ideas, and the Panasonic technology to facilitate them, we were proud to see the community unite in a celebration of Waltham Forest culture.”